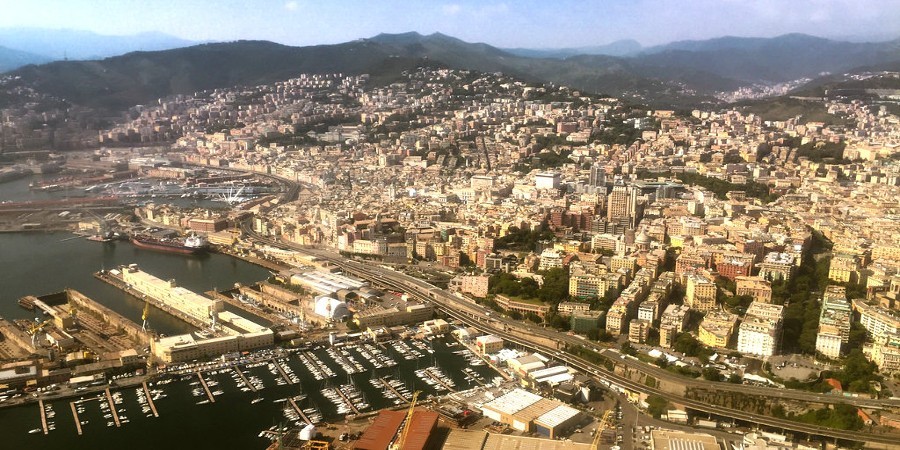 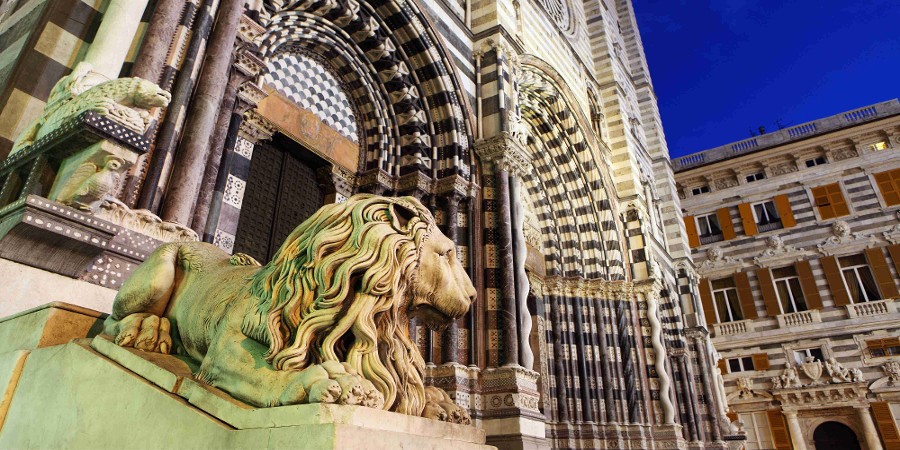 You can choose among different theme-based itineraries to discover the beauty of the Superb, with a private guide!

You will feel surrounded by and breathe in the atmosphere of ancient times. The tours and urban paths are an original and innovative way of discovering the cultural urban heritage. History becomes interesting, fascinating, attractive and fun!

Enjoy a walk through the vicoli (narrow streets) of the city, the fascinating story-telling of official facts by your tourist guide full of details, enlightened by a dim light, forgotten though the years. Listening to antics, gossip, myths and legends you will discover the charm and beauty of a hidden, secret Genoa.

You can choose among the following tours, each of them lasting three hours:

A journey through centuries, to discover the beauty of the contrasts in the old Town.

Starting in the Aquarium area, the renewed old harbour area or Porto Antico, and going through the intricate tangle of alleyways, the “caruggi”. You will reach San Lorenzo Cathedral and get to heart of the city: Piazza De Ferrari. There you will find the Carlo Felice theatre, together with the nearby elegant liberty-style New Stock Exchange, or Palazzo della Nuova Borsa, the Palazzo Ducale and the building of the Accademia Ligustica di Belle Arti (Ligurian Academy of Fine Arts). Then you will head for Strada Nuova (literally “New Street”) and today’s Via Garibaldi, UNESCO world Heritage Site, to admire the splendid palaces built in the XVI century, at the golden time when Genoa was an ancient Republic.

The old shops are the true essence of the ancient city. This tour talks about cooking and non-cooking traditions, antics and curiosity typical of the city of Genoa, of the Riviere and the hinterland.

“Friggitorie, forni, sciamadde”…. These words arouse flavours and tastes of the past. These shops have been there for centuries and are very busy places still nowadays! Going through the vicoli of the Old Town - which are less renowned, you will be disclosed charming secrets. As in a real time machine, this route will take you to discover places where time seems to have stopped. Old traditions and crafts, deeply rooted in time co-exist together with progress, in a multisensory discovery trip.

Taken by the most ancient Genoese means of transport, the funicular, you will discover ancient coffee shops and conventual pharmacies, close to their surviving medicinal herbs garden.

Genoa has the biggest old town in Europe, featuring charm, and part of the UNESCO sites. This is a real time travel, strolling through the “caruggi”.

This route starts from the sea and it will tell you about some of the secrets the ancient city is full of!

Discover the grey stones of medieval buildings, along with their slate, considered as black gold in Ligury and the white marble of churches and palaces.

The medieval city deserves to be visited and observed even raising your look up to the sky, to look for and find votive aediculas, headstones, low relieves and door frames, which tell stories of conquest in the Mediterranean, of knights, Saints and devotion. What is left nowadays of the past Genoa? The tramway, horses and old buildings.

This itinerary takes visitors to discover a city which doesn’t exist anymore, if not in original old postcards, dating back to the old times of the immense, magnificent, Finauri collection.

The itinerary will take you to discover those places, eternalized in those precious images.

Genoa can be considered as a great musical score, performed by its vicoli and palaces, intertwined with the memories of great characters who loved the city, sang about it and have revived it in their immortal songs.

A melody at each corner: from the sound of a violin, - the one of Paganini - to the places of Verdi, going through the city of great songwriters, Natalino Otto and De Andrè, to name a few.

This is an itinerary to discover the vicoli and corners which seem to ooze notes, antics and appeal to curiosity. Whispered in your ears they will tell you mysterious, moving stories, full of music which talk straight to the heart.

- The “Golden Age”, the Genoese Renaissance

The XVI century, the so called “Golden Age”, was a time of great splendour, which started with an alliance between the Republic of Genoa and Spain.

The magnificent private mansions built during that century attracted a fine artist like Rubens, who came to Genoa accompanying the Gonzaga, Dukes of Mantua.

This itinerary runs through the places where some of these palaces are, which are part of the “Rolli system”, splendid residencies belonging to the richest families. Their role was hosting important people officially visiting the city.

The “Rolli Palaces” are a unique unicum which bear witness to the richness and splendour that the Republic of Genoa reached in that period. The local economy, banks and trade have always represented the real throbbing heart of the city of Genoa. Crossroads of goods and people, the city has its roots in the cultural melting pot.

The itinerary describes Genoa explaining its historical business vocation: from the first bank in Europe, to currency exchange counters, from Niccolò Grimaldi to the baron Andrea Podestà, from the suq as interface between a city and its visitors, to finance architecture. A Mediterranean culture, developed by the sea, based on the scents of spices, on its markets and negotiations, which have always been key activities for the city.

The mysticism and sobriety of medieval structures matches an exotic, coloured and lively atmosphere, full of fuss, enthusiasm and emotions.

The cemetery represents not only the place of memories for the Genoese, but also a fascinating, historical and artistic evidence of the city.

Often called an open air museum, due to the concentration of works by great artists and architects who worked to build the eternal resting places of the Genoese and foreigners alike, with hundreds of statues lined in the galleries, a series of porticoes (termed “porticati inferiori / lower arcades”) and side chapels, which are an important artistic evidence of sculpture in Ligury, between the nineteenth and twentieth century. There are several artistic languages represented here by the sculptors, from Realism, Neo-gothic and Neo-renaissance, to Liberty and Symbolism.

The cemetery is the eternal resting place of prominent citizens, among the others Fabrizio de André and Gilberto Govi; you will even find the tomb of lady Constance Wilde, miserable wife to Oscar Wilde.

Around the “boschetto” (small forest), among green trees, you will also find the tombs of Giuseppe Mazzini, many garibaldini (followers of Garibaldi) and heroes of the Italian Risorgimento.

-Genoa as a cinema set…

It is a city which has played the host to many art-house films and has been the stage for exciting feelings and stories. This itinerary shows its most unexpected aspects.

Famous directors, great actors and less famous artists have shown their version of Genoa as taken by their cameras. The stories of many characters and many movies are shown in film format: from romance, to thrillers, from action films to drama. An exciting itinerary, jumping from one set to another, to discover an evocative, ambiguous, intriguing and fascinating Genoa: the visitor will hold his breath. It is a different way of discovering the city, from another point of view: the one going through benches, to hidden corners, from Grand Hotels to the city walls, from love to rage.

At the end of each tour you will have the opportunity to taste some typical Genoese focaccia (flat bread)!

CALL NOW!
Contact us every day during office hours
010.0980269
Chat with us
Notify the trip code: GENSCOPER